Well, faithful followers, it's been a while since I posted anything so I thought I should at least post my fuel usage numbers.  As you can see, (assuming you can decipher my spreadsheet), CKenergy has saved almost $1,900.00 in fuel over my former car, a Ford Taurus.  $1,900.00 Doubloons!!!  Crazy, huh?

I guess the main reason I haven't posted is that I really haven't had anything TO post.  The car is a great car.  There have been zero problems of any kind.  It's a car that hauls booty while making no sound.  It needs no oil changes or anything else for that matter.  It's...just...a...car.  I suppose most of us were expecting weird things to fly out from beneath the car, or that eventually there would be an engine pop out that was being concealed somewhere, or that I'd have to make an emergency run to Walgreens for new Duracell batteries.  But no, it's...just...a...car.

There are more and more electric cars and trucks in the drawing rooms and being tooled up for manufacturing in car makers all over the world.  The tidal wave has only begun to form.

Popular posts from this blog 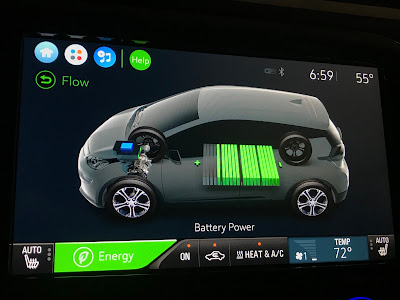 Charging up the batteries and getting ready to go!  Heading out to Salt Lake City for the annual NRECA Connect Conference.  This year includes a special event called the Drive to Connect.  Several teams from cooperatives around the country are driving their EVs to the conference to showcase the electric vehicle and its current capabilities as well as future capabilities.  CKenergy has a team and we're called the "Gas Kickers".  Easy folks, it only sounds familiar. My son, Jay, is traveling with me as my partner so conversation will not be lacking.  He is much like his momma and we will have plenty of conversation.  Okay, I admit, I'm a lot like his momma too, so the miles should tick away before we know it.  One of the drawbacks for cross country EVs is the lack of locations to charge, especially rapid charging.  After plotting my path, I realized I had all of 3 days travel ahead of me and that's assuming I found every charging station properly functioning and
Read more 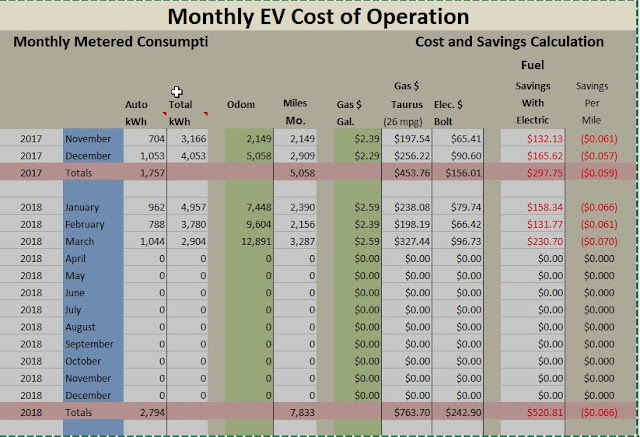 Well, it's been kind of a boring month, not from a driving standpoint, but from a lack of news standpoint.  The little Bolt is just humming along.  As of the end of March I've driven a tad over 13,000 miles without an oil & filter change.  They tell me that first oil should last about 100,000 miles.  I can hear someone out there right now saying, "hey Honey, call CKenergy and find out what kind of oil they're using.  We gotta have some of that!" In all seriousness, the fuel savings after only 5 months is a whopping $818.56! The jury is in and the fuel savings is excellent.  There are a few exposed weaknesses in EVs, but as a commuter and mid-range vehicle, it's fantastic.  The next step is to attempt a multi-state drive next month.  Stay tuned for more information.
Read more